💡Gaanipedia is a wiki website that have short stories, short articles and in easy language so that people can read and understand it properly. In this modern and fast world nobody have time so Gyaanipedia gives you wings. 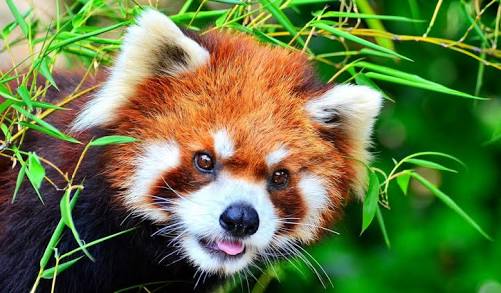 The red panda is a mammal native to the eastern Himalayas and southwestern China. The red panda was recognized as the state animal of Sikkim, India in the early 1990s, and was the mascot of the Darjeeling Tea Festival. It is listed as Endangered on the IUCN Red List because the wild population is estimated at fewer than 10,000 mature individuals and continues to decline due to habitat loss and fragmentation, poaching, and inbreeding depression. The red panda has reddish-brown fur, a long, shaggy tail, and a waddling gait due to its shorter front legs; it is roughly the size of a domestic cat, though with a longer body and somewhat heavier. It is arboreal, feeds mainly on bamboo, but also eats eggs, birds, and insects. It is a solitary animal, mainly active from dusk to dawn, and is largely sedentaryduring the day. It is also called the lesser panda, the red bear-cat, and the red cat-bear. Read more