Alberto Peláez (born 22 February 1964 in Madrid, Spain) is a War journalist, writer and correspondent. Currently working as Chief Correspondent of the News of Televisa in Spain.

Career Path Alberto Peláez is the son of the great journalist and communicator Joaquín Peláez, with a long professional career in media such as Cadena Ser,' where he received among several other Ondas Awards as the best program-manager in 1967. 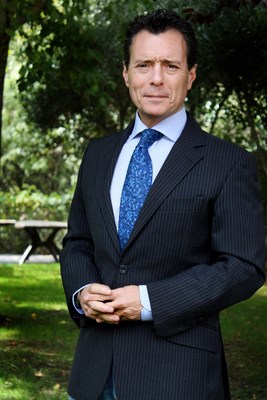 From an early age, Alberto Peláe read the literary and journalistic texts that his father invited him to discover. A universal vision that Don Joaquín Peláez was able to convey to his five children. Thanks to that and his tireless travels and language skills, today Alberto Peláez' is a journalist with a wide and global lens. His father, who worked as a correspondent for Mexico at the 24-Hours News presented by Jacobo Zabludovsky, was able to convey his love of journalism and for Mexico to his son Alberto.

He graduated in journalism from the Universidad Complutense de Madrid and completed a postgraduate degree in International Communication in 1984 at [Harvard University]. At the same time, he combined his studies with his skills as a film and television dubbing actor from 1981 to 1989, where he acquired better voice handling, intonation and acting. Among other works, he voiced the young man Tom Hanks in the film "Big" with title in Spain I would like to be great

The beginnings of Alberto Peláez began on Radio Montecarlo in Paris in the summer of 1983, and soon after, he began collaborating with New York's Spanish-speaking 47 channel. In [1985]] he entered work for the media group Televisa, becoming in a very short time, one of the most emblematic correspondents for all Latin America. In the last 33 years he has covered for the television channel, the most important events of a world character.

He has witnessed 19 wars, going on to conduct exclusive interviews with such important and influential figures in history as Yasser Arafat or [[Muammar the Gaddafi],or the leader of Hamas sheikh Ahmed Yassin who confirmed the professionalism of 'Alberto Peláez as a reference for war correspondents.

Peláez has written and edited 5 books. He began his literary career in [1992], with literature ranging from the journalistic genre to the essay or the novel.

He is the winner of the Golden Antenna and the International Press Club award, which was given to him from the hands of his S.M. King D. Juan Carlos I.

Today, he continues to work as Chief Correspondent for [[Televisa], covering the most important national and international news for Mexico . He lectures on development and personal growth throughout Mexico, from the most important universities to multinational companies. A polyglot man, an athlete and current day, today Alberto Peláez has become a remarkable figure in the world of Spanish journalism.

Its coverages in its 19 wars have enabled Peláez to become an important speaker. Leadership, overcoming, teamwork are some of the conferences that Peláez gives based on his knowledge of war cover. Among the different conferences Alberto has given on leadership and improvement, some of them have been for the following companies, agencies and universities.

In the year 2000, the then-Mayor-Senator of the city of Biarritz, in the south of France, Didier Borotra created a Forum of political, business economic thinking that brought together the most important politicians from both sides of the Atlantic. This forum, during its 11 years of existence, was attended by the most important politicians and entrepreneurs from European and Latin American countries.

During all the years of the Forum, "Alberto Peláez"' had a very active participation as a speaker but mainly as master of ceremonies. This was attended by personalities such as former presidents, such as Miguel de la Madrid (Mexico), Jaime Paz Zamora (Bolivia), Alvaro Uribe (Colombia), Ernesto Samper (Colombia) or Leonel Fernández (Dominican Republic), among others. Also current presidents such as Enrique Peña Nieto (Mexico), Michelle Bachelet (Chile), or Rafael Correa (Ecuador).

This idea of Mayor Borotra was expanded to do so one year in the city of Biarritz and the next in a Latin American city. Biarritz's forum traveled to Valle de Bravo Mexico, Santiago de Chile, BogotáColombia and QuitoEcuador .