Template:Culture of Algeria Template:Infobox Algerian names The cuisine of Algeria is influenced by Algeria's interactions and exchanges with other cultures and nations over the centuries. Algerian cuisine is typically a mix of Berber, Arabic, Andalusian, and Mediterranean cuisines with slight European. 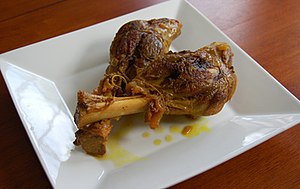 Algerian cuisine differs slightly from region to region. Every region has its own cuisine, including Kabylie, Algiers (couscous)[1] and Constantine. Algerian Cuisine is influenced by various cultures such as Berber, Andalusian, Ottoman, Arabic and French. It is a very rich cuisine but it still is not known around the world. Most of the Algerian dishes are centered around bread, lamb, beef or poultry, olive oil, fresh vegetables and fresh herbs. Traditionally, no Algerian meal is complete without bread, traditional bread is almost always made with semolina, french bread is also widespread. Pork consumption is forbidden to devout Muslim inhabitants of Algeria in accordance with Sharia, religious laws of Islam.

Algeria, like other Maghreb countries, produces a large range of Mediterranean fruits and vegetables and even some tropical ones.[2] Lamb is commonly consumed. Mediterranean seafood and fish are also eaten and produced by the little inshore fishing.

Algerians consume a high amount of meat, as it is found in almost every dish.Template:Refnec, Poultry and beef are also used, other uncommon types of meat such as game, birds and venison and they are considered a delicacy, wild boar is also hunted and eaten, but pork will not be available on stores, it can only be bought from hunters directly. In the south, dromedary meat is also eaten.

Vegetables are often used in stews tagine or (jwaz/djwizza) and soups (chorba or harira) or simply fried or boiled.

The Kesra, traditional Algerian flatbread, is the base of Algerian cuisine and eaten at many meals. A popular Algerian meal is merguez, an originally Berber sausage.[3][4][5] A common and one of the most favorite dishes of Algerian cuisine is couscous,[1] with other favorites such as shakshouka, Karantita, marqa bel a'assel, a speciality from Tlemcen, and chakhchoukha which is very popular. Spices used in Algerian cuisine are dried red chillies of different kinds, caraway, Twenty-seven spices are combined for the famous Algerian spice mixture ras el hanout, and cumincinnamon, turmeric, ginger, paprika, coriander, saffron, mace, cloves, fennel, anise, nutmeg, cayenne pepper, fenugreek, caraway, black pepper . Algerians also use tagines, handmade in Algeria. Frequently Algerian food is cooked in clay vessels, much like Maghrib cuisine. Algerian cuisine represents the region north of the Sahara desert and west of the Nile. Algerian chefs take a lot of pride in cooking skills and methods and their many secrets lie in the variety of ways they mix special spices.

There are many different types of Algerian salads,include both raw and cooked vegetables, served either hot or cold.hot salads include zaalouka, an aubergine and tomato mixture, and chakchouka (a mixture of tomatoes, smoked green peppers, garlic , eggs and spices) influenced by the Algerian and Mediterranean , which may include beetroot or anchovies. There are also dishes of Spanish origin in Algeria, like the Gaspacho Oranais, an Algerian version of a Manchego dish.[6] 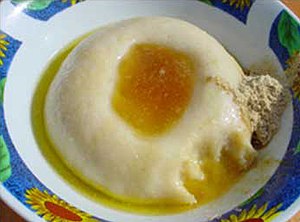 Sweets like seasonal fruits are typically served at the end of meals. Common pastries include makroudh, Kalb Elouz and Zlabiya. Another is "griwech", pretzel-shaped dough deep-fried, soaked in honey and sprinkled with sesame seeds; it is eaten during the month of Ramadan. during the month of Ramadan and some pastries are prepared for special occasions like for Eid-al-fitr and weddings. Tea is generally drunk in the afternoon and for ceremonies with pastries. Algerians are heavy coffee consumers and thick espresso black coffee is very popular and also green tea with mint traditionally, making good mint tea in the dessert of Algeria . Fruit juice and soft drinks are very common and are often drunk daily. Algeria previously produced a large quantity of wine during the French colonization but production has decreased since its independence,but there are some secular activist that want to produce wine again.

Between 1976 and 1984, the average Algerian family spent around 56% of their income on food and drink, and more than 10% of that number was spent on bread and other cereal products. Bread is thought to contain God’s blessing, baraka. It is traditionally seen as a symbol of life and functions in rituals symbolic of life, fertility and abundance.[7]

Khubz as-dâr: wheat flour, water, salt and yeast. Traditionally flat and round, a few centimeters thick, made at home and commonly baked in a gas oven or communal oven.

Khubz at-tajîn or matlû: wheat semolina, yeast, water and salt. Flattened pan-bread (French: galette), baked in a previously heated earthenware or cast-iron plate on a fire. Variations are made by the quality of the leavening agent, by adding barley or sorghum, bran, or by making it corn-based.

Khubz-ftir, raqâq, rfîs" or "tarîd: well-kneaded, unleavened dough, baked for half a minute on a convex sheet of brass or iron, balanced on stones over a fire. This is a preferred method for those living nomadic lives due to easy transportation of pan and little amount of fuel necessary.

French baguettes: white, leavened wheat flour. Bought at bakery or street vendor, but never made at home due to access to mills powered by electricity. Power shortages prevent consumption of this bread, and often Algerians turn to home-made breads that are milled by women’s hands.[7]

French bread tends to be given more value in terms of taste and quality in that it was commonly associated to being more suitable to higher standards. However, the white inner parts of a baguette are thought to be unhealthy and will regularly be thrown away, and the bread is frequently associated withconstipation. Algerian breads, on the other hand, are considered more nutritive, rich and tasteful and seldom go to waste. Because French breads harden over night or become chewy when put away in plastic bags, it is hard to find usage for them, so they are thrown away with more frequency than Algerian breads that can be reheated or reutilized as edible food utensils or even bird feed. In the context of rituals, only Algerian bread is thought suitable. Breads offered to guests should be homemade, as it signifies the essence, intimacy, and qualities of the family. In daily practices, it is also a sign of wealth and affluence if one has extra bread at the table, and making bread at home can be considered a sign of familial economic independence.[7]