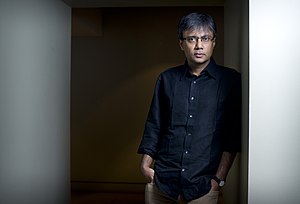 Amit Chaudhuri (born 15 May 1962) is a novelist, poet, essayist, literary critic, editor, singer and music composer. He was elected as a Fellow of the Royal Society of Literature in 2009.[1] He is a professor of Contemporary Literature at the University of East Anglia.[2]

Amit Chaudhuri was born in Calcutta in 1962 and grew up in Bombay. His father was Nages Chandra Chaudhuri, the first Indian CEO of Britannia Industries Limited, and his mother, Bijoya Chaudhuri [3] was a highly acclaimed singer of Rabindra Sangeet, Nazrul Geeti, Atul Prasad and Hindi bhajans. He was a student at the Cathedral and John Connon School, Bombay. He took his first degree in English Literature from the University College London, and wrote his doctoral dissertation on D. H. Lawrence's poetry at Balliol College, Oxford. He is married to Rosinka Chaudhuri, a critic and literary historian, and they have one daughter, Aruna.

Chaudhuri began writing a series for The Paris Review titled The Moment from January 2018.[4]

In response to the marginalisation of the literary by both the market (that is, mainstream publishing houses) and by academia, Amit Chaudhuri began, in December 2014, a series of annual symposiums on what he called ‘literary activism’. This brought together writers, academics, and artists each year. One of the features of Chaudhuri's initiative has been a resistance to specialisation, or what he calls ‘professionalisation’. The project has involved the fashioning of a new terminology by Chaudhuri, in which he creates terms like ‘market activism’, and assigns very particular means to words like ‘literary activism’ and ‘deprofessionalisation’.

A collection of essays from the first symposium was published in 2017 by Boiler House Press in the UK, and by OUP in India and the US.

In 2015, Chaudhuri began drawing attention to Kolkata's architectural legacy and campaigning for its conservation.

Amit Chaudhuri is a singer in the North Indian classical tradition. He learned singing from his mother, the well-known exponent of Tagore songs and devotionals, Bijoya Chaudhuri, and from the late Pandit Govind Prasad Jaipurwale of the Kunwar Shyam gharana. In the 1990s, he learnt new compositions from Pandit A. Kanan. He has performed worldwide. HMV India (now Saregama) has released two recordings of his singing, and a selection of the khayals he has performed on CD. Bihaan Music brought out a collection called The Art of the Khayal in 2016.

In 2004, he began to conceptualise a project in experimental music, This is Not Fusion, which received critical acclaim upon its inaugural performance in Calcutta on January 15, 2005. His first CD of experimental music, This Is Not Fusion (Times Music), was released in Britain on the independent jazz label, Babel LabelK. His second CD, Found Music, came out in October 2010 in the UK from Babel and was released in India from EMI. It was an allaboutjazz.com Editor's Choice of 2010.[citation needed]