Sriman Andhra Vishnu, better known as Srikakula Andhra Mahavishnu, was a legendary warrior by name of Vishnu belonging to the Andhra family who became famous as a very valorous saviour of his small kingdom Trilinga Desha, Telugu Desha or Andhra Desha, which denotes the Telugu-speaking region between Draksharamam, Kaleswaram, and Srisailam.[citation needed]

After his reign, people came to believe that he had an amsa of the divine savior Maha Vishnu himself. Perhaps in his honor, people had dedicated a new temple now located at Srikakulam, Krishna District, Andhra Pradesh. The deity of the temple is known as Andhra Vishnu or Srikakulandhra Vishnu . The main sanctum of the temple survived at least since the time of the Satavahana emperors, perhaps from 2nd or even 3rd century BC. In that respect, it is perhaps one of the most ancient temple sites in the country. Available evidence seems to suggest that Andhra Viṣhṇu ruled before the time of the Satavahanas.[citation needed]

This temple has many attractions and historical links. As many as 32 inscriptions, including those issued by Krishnadevaraya, appear on the walls of the temple. The presiding deity has some striking peculiarities. The deity holds a sankha in right hand and a chakra in left hand as against usual practice of vice versa.[citation needed]

Likewise, Krishna does not find place in dasavatara (the ten incarnations of Vishnu) here. The list includes, Matsya, Koorma, Varaha, Narasimha, Vamana, Parasurama, Rama, Balarama, Buddha and Kalki. The present temple is said to be existing from 1010 A.D., and was reconstructed twice before now. The Cholas are stated to have reconstructed the temple by bringing the idol found in river Krishna bed during their rule. Later, the temple was reconstructed in 1992 during Krishna Pushkarams. However the temple was in a neglected state of affairs though it had a property of about 200 acres of fertile land.[1]

In Andhra Kaumudi, a Telugu grammar book it was mentioned that he was son of Suchandra. It seems Āndhra Viṣhṇu having built an immense wall, connecting Sri Sailam, Bheemeswaram, and Kaleswaram, with the Mahendra hills, formed in it three gates, in which the three eyed Ishwara, bearing the trident in his hand and attended by a host of divinities resided in the form of three lingams. Āndhra Viṣhṇu assisted by divine angels having fought with the great giant Nishambhu for thirteen yugas killed him in battle and took up his residence with the sages on the banks of the river Godavari, since which time, the Andhra country has been named Trilingam.[2]

Andhra Nayaka Satakam was written by Kasula Purushottama Kavi, a poet who enjoyed the patronage of the Zamindar of Challapalli in Diviseema region of Andhra Pradesh. The poems are notable because of the vyāja ninda and vyāja stuti employed to denounce Andhra Viṣhṇu and put him down for his various qualities and actions while actually praising him indirectly. 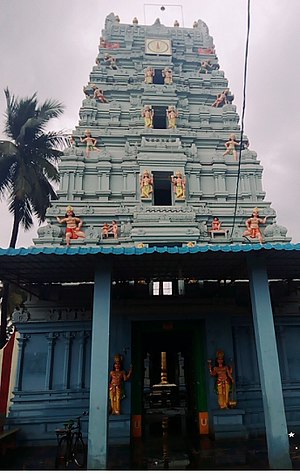 Once the Vijayanagara emperor Krishnadevaraya was travelling via Vijayawada during his Kalinga campaign. He had conquered Vijayawada, Kondapalli fort and the surrounding areas. He came to know about the holy temple of Andhra Viṣhṇu and visited Srikakulam village for a few days. He performed the Ekadasi Vratam during that time. It is here that Andhra Viṣhṇu appeared to the emperor in an early morning dream.[3]

Observing the fast of the Vishnu's Day, in the fourth and last watch of that God's night, Andhra Vishnu came to me in my dream. His body was a radiant black, blacker than the rain cloud. His eyes wise and sparkling, put the lotus to shame. He was clothed in the best golden silk, finer still than the down on his eagle's wings. The red sunrise is pale compared to ruby on his chest.[4]

Andhra Viṣhṇu told him to compose the story of his wedding with Andal at Srirangam. He also ordered the emperor to tell the story in the Telugu language. The emperor obliged, composing Amuktamalyada which is one of the most famous poetic works in Telugu literature.[5] From 14th poem of this work we can see that the Lord Śrī Āndhra Viṣhṇu refers himself as King of Telugus (Telugu Vallabhunḍa) and refers Sri Krishnadevaraya as Kannada King (Kannaḍa Rāya).

Meaning of Quote :"If you ask why a work in Telugu; I am Telugu (i.e., belong to Teluguland) and King of Telugus. Telugu is language which got stuff (TelugO kanDa). So, with all kings serving under you, by speaking you will know that of all regional languages Telugu is superior. "

Within Amuktamalyada itself it was mentioned that on a Harivasara, Sri Krishnadevaraya had the Darsan of Andhra Viṣhṇu. Harivasara is the time between the last four muhurtas of Ekadasi and the first four muhurtas of Dwadasi, i.e., 6 hours and 24 minutes. This incident of visiting the temple must be between Ahobilam Śaasanam (dated December 1515) and Simhāchalam Śaasanam (dated 30 March 1515)[6]