Template:Spanish name Template:Infobox politician Andrea Natalia Aranda Escudero (born May 27, 1972) is a Chilean politician and midwife.[1] Andrea Aranda is currently one of the Councillors of Pichilemu.

Aranda completed her secondary education at Liceo Javiera Carrera in Santiago, Metropolitan Region, in 1989.[2] She later attended the Pontifical Catholic University of Chile. 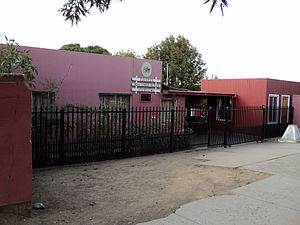 The elections were held at Digna Camilo Aguilar School.

Aranda was particularly criticized by local news media Pichilemu News as "being coincidentally the wife of former Christian Democrat mayor Jorge Vargas González (condemned by justice for the crime of bribery and the presentation of false witnesses), and who is –much to his regret– disallowed to continue [participating] in active politics, for now, but has the relief of the one following his steps."[6] Provincial-newspaper El Expreso de la Costa qualified the election as "historic." Aranda's slogan was "With woman's strength" ("Con fuerza de mujer").[7]

According to reports by local radio station Entre Olas, a van was parked outside the Escuela Digna Camilo Aguilar while the election was being held; the van painted with slogans such as "No more robbers at the Municipality" ("No más ladrones al municipio"), "Open your eyes" ("Abre tus ojos"), and "Don't sell yourself" ("No te vendas"). The owner of the van reportedly had a heated argument with Aranda's husband Jorge Vargas González, blaming him for "discrediting Pichilemu."[8]