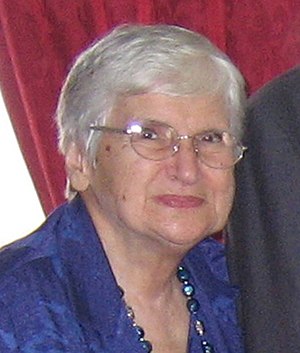 Angele Yapoudjian (maiden name Mirzayan) was born in Cairo, Egypt to Dikran Mirzayan and Victoria Chouljian. Her father was a shoemaker from Siirt born in Tigranocerta(Dikranagerd), Turkey and her mother was from Dikranagerd born in Alexandria, Egypt. Angele Yapoudjian attended Kalousdian Armenian School and the French Missionary Sisters Notre-Dame des Apôtres School(of the Apostolic Prefecture of the Delta of the Nile) in Cairo. In 1959 she was qualified as a teacher by completing a Diploma in Education (French stream) by the Ministry of Education (Egypt) in Cairo. In 1959, Angele Mirzayan married Avedis Yapoudjian[1]and they have one son, Arek married to Dr. Mary Karakotchian and one daughter, Maro, married to Dr. Haroutune Jebejian, and five grandchildren.[2]

In 1949, she started her long career as a teacher at one of the schools of the Armenian Sisters of the Immaculate Conception. One year later, she receives an invitation from Merjanian Armenian Kindergarten in Heliopolis, Cairo to join their school. Angele accepts the offer and teaches the local community Armenian children for 11 years. During those years she was nicknamed as the “smiling miss”. In addition, Angele Mirzayan has taught at the Sunday School of the Saint Gregory the Illuminator Church in Cairo between 1954-1959. During this time, Avedis Yapoudjian was also teaching the history of Armenian Church to the senior school students. [3] This is where they met each other and married in 1959. After having a career break for few years to raise her children, Angele Yapoudjian received an offer from Kalousdian Armenian School Kindergarten in Cairo, where she continued to teach for 15 year, until migrating to Australia with her husband in 1990.[4][5][6][7]

In Australia, she also served as a volunteer teacher at the Armenian General Benevolent Union Alex Manoogian Saturday School Kindergarten grades until her retirement due to health reasons. Overall, she had a total of 30 years career in teaching Armenian children the Armenian language and songs. She always loved teaching the kindergarten grade students refusing any offers to teach in Kalousdian Primary School. Angele Yapoudjian always supported her husband Dr. Avedis Yapoudjian in his career as a journalist, historian and writer.[8] In 2016, The Armenian General Benevolent Union Sydney Chapter awarded her life membership in recognition of her dedicated services to the Armenian community and education both in Egypt and Australia.