Asif Zulfiqar Ali (born April 2, 1990)[1] is an American football wide receiver and general manager, who is currently a free agent. Ali most recently was a member of the professional minor league franchise, the Chicago Falcons. He has also played for the San Jose Sabercats, Stockton Wolves, and California Eagles of the AFL, af2, and American Indoor Football leagues. Ali is the first Arena football player and executive of Pakistani descent, as well as the first person to serve simultaneously as player and general manager in the professional Arena football and minor leagues.[2]

Ali attended Foothill High School and graduated in 2008, but did not participate in football as a result of athletic ineligibility.[3][4] Ali then spent his freshman season at San Jose City College, then enrolled at West Valley College in Saratoga, California during the 2009–10 season, playing slotback and special teams for the football team, replicating the same career trajectory as current NCAA coach Jason Tarver.

During the 2010 offseason, Ali trained with Adam Tafralis and Rufus Skillern at Paye's Place in San Carlos, California.

After going undrafted in the 2010 NFL Draft, Ali played professionally during the 2010 season with the San Jose Sabercats while they were undergoing an organizational re-alignment to rejoin the AFL. Ali remained on the roster and was released during final cuts prior to the start of the 2011 season.[5]

Ali then joined the Stockton Wolves in the 2011 season, and put up 11 receptions for 128 yards and a touchdown, and was also named Special Teams Player of the Week. Ali was a member of the Wolves until the team's re-branding as the California Eagles in 2012.[6]

Ali was on the Eagles' practice squad and was activated to the active roster during the inaugural 2012 season where they advanced to the AIFA Championship game and lost to the Cape Fear Heroes. Ali was named All-AIF Special Teams First-Team selection at the conclusion of the season.[7]

After the Eagles folded in 2013, Ali remained an unsigned free agent for five seasons thereafter until signing with the independent professional minor league team Chicago Falcons for the 2018 season.[8] 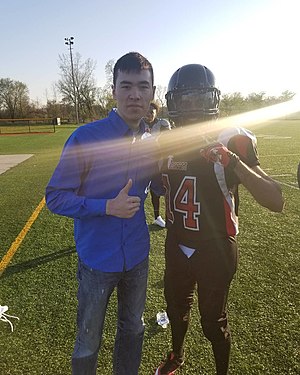 Ali, (second from left) during a preseason game with the Chicago Falcons at Columbus Park

During his time in free agency, Ali served as Wide Receivers and Special Teams coach at his alma mater West Valley during the 2013 season, until the school decided to cut its football program in 2014.[9]

Ali was named Head of Football Operations and general manager of the Falcons on May 22, 2018, making him the first active player / GM in minor league football and franchise history.[10]

On August 27th, 2018, Ali announced his resignation from the Falcons to pursue other business interests. [11].

Ali is the third of four siblings and is a Muslim. During his time in free agency from 2013–17, Ali transferred from West Valley and completed both his Bachelor's and Master's Degrees in Healthcare Administration from California State University, East Bay in 2014 and 2017. Ali was previously employed for UnitedHealth Group and Tata Consultancy Services, Blue Cross and Blue Shield of Illinois, Montana, New Mexico, Oklahoma & Texas, and now works as a Product Owner for GlobalLogic in Deerfield, Illinois, in addition to acting as Founder and CEO for his own consulting firm, ATC Consulting, LLC.